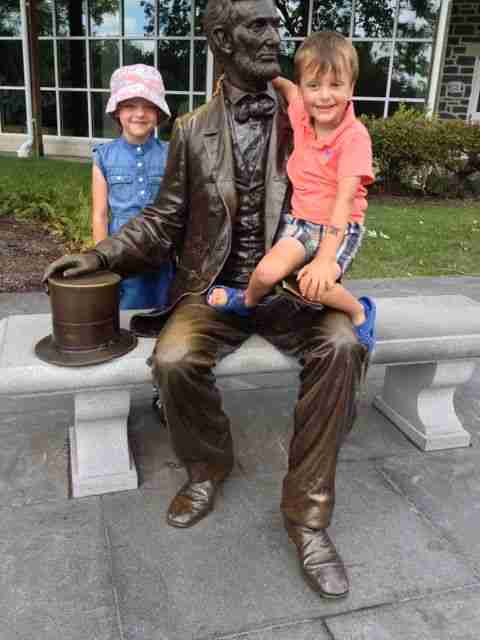 You are here: Home / Captains Log / Road School at Gettysburg

We’ve been hyping up the Jr Ranger Badge program the National Park Foundation offers for months now. Gettysburg was sort of just a pit stop to break up the drive so Brecht worked and I took the kids to the National Military Park in Gettysburg.

Before we left we talked a bit about the history. I’m fairly certain that they could still tell you why the Civil War happened and who the President was when it happened.

The Badge took a few hours. There was a booklet with a list of activities which were worth different amounts of points.  The kids had to complete 4 points. Doesn’t sound like much, but it was.

The kids took turns labeling the soldiers gear and clothing in the picture above. Vince was happy to write out the letters r-i-f-l-e and I was happy to see him write letters.

Next, we hopped in the van and drove around (before you judge, there were miles to cover) looking for  items on a BINGO card. And finally, Madeleine chose one monument to study and write about.

With our work complete we headed back for the Ranger to check it. Then for the most exciting part, the swearing in and presenting of the badges….

With all the whining and fighting that came along with this trip, we ended on a good note. Mission accomplished.