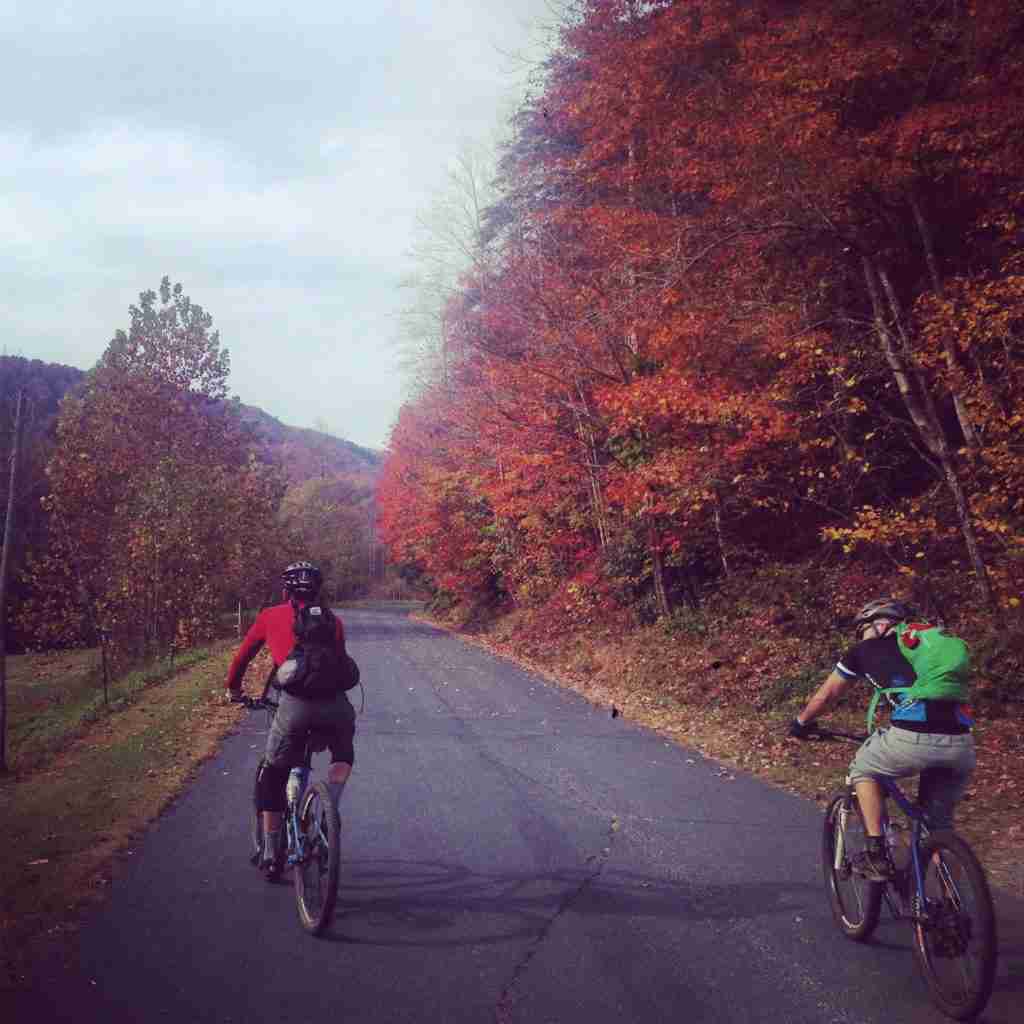 Friday night was the first time that we were forced to make a split decision due to weather.

We had been in Asheville for the month of October. We have some fluid plans with two sets of friends in the Atlanta region but our next firm date isn’t until later in November with a giant mouse and some other questionable characters down in Orlando.

We’d been deliberating about staying longer in Asheville because we’d really been enjoying it and we’re considering it as a future home base. There’s so much more that we wanted to do there… so many more places I wanted to ride. You’d think that a month would be enough, but it wasn’t.

You could say that, after a month, we’d “settled in” a bit.

The forecast turned for the worst and Asheville was expecting several inches or more of snow.

What does that look like for a DPW in North Carolina? Not good we wagered and we’d heard that the city will shut down with a few inches of snow.

Where we’re from a few inches is just an appetizer but… did we really want to be driving a rear wheel drive 15 passenger van in a southern city shut down by snow? Or worse did we want to hunker down in our 240 square feet with the kids for several days?

Long story short, we had to get out of there.

We weren’t sure where we were going to go next and we didn’t have anything booked before Florida. We planned to go to Charleston, a little place called FATZ trail system north of Augusta, Bull Mountain in Chattahoochee and Atlanta are on our list for various reasons but other than that we’re flexible.

It took a few calls to find a place with an opening. There was nothing available in Augusta that we were amenable to and with a few more calls we had reservations in Charleston.

If you’re going to be on the road full-time you’ve got to be flexible… but shouldn’t you be regardless?

Our Ideas Are Evolving

If we can do this what else can we do?

What else should we do?

What else would we want to do?

I met a fellow cyclist at the Bent Creek parking lot named Andrew. Six months ago he quit his job.

He recently flew, by himself, to Calgary. He rode his bike from the Calgary airport to Banff in Alberta. Then he rode his bike down the continental divide to New Mexico over six weeks with two other guys he had just met on the ride his very first day.

He always wanted to do that ride… When was a boss going to give him 6 weeks off to do that?

The program we’re supposed to run goes… Get a safe job, earn, borrow, spend, invest a bit through a 401k, repeat…

Well until we can earn enough to borrow enough to get bigger better stuff of course.

Then one day when you’ve done 20 or 30 or 40 years of that and you didn’t eat shit in the stock market and real estate has done just what its supposed to then, oh yes then, you can do what you want.

Then you’ll be living.

I’m not advocating that everyone quit their jobs and drive around. Not at all. Its not what I’ve done.

I am however suggesting that the idea that if you follow that program and hope that someday all the stars are going to align and someday you’re going to finally do the things you want to do… it’s bullshit.

How many people do you know of who are at or near retirement age today who did that and have the money AND the health that they’d hoped for and now they’re finally going to live the dream?

They are few and far between.

The entire program is rubbish.

I’m just saying that if you’ve been waiting to really live, stop it.

We’re Planning to Live Smaller So We Can Live Bigger

The other day Becky took the 3 kids and drove an hour away from camp and hiked for an hour and a half on her own. You know how many times she did that when we were back in our very deep groove (er, rut)?

I think being “light” and to keep it moving is the key and we’re talking a lot about that.

What if we had a little place… or multiple little places in a couple of places… and we AirBnB’d them when we weren’t there?

I’m going to go ahead and proclaim that the traditional idea of success where you acquire ever larger places to store your stuff is bankrupt. I have no interest in it.

This isn’t to say that we don’t want money or security; we most definitely do. (If you’re a listener I know you know that’s true).

I’m not saying that there’s anything wrong with setting roots or feathering your nest or even doing so in a big way… if that’s truly where you’re finding your joy and that’s something that bring you real satisfaction.

Our plan going forward is to be more intentional about our lives and to optimize for what’s most fulfilling and important.

A bigger house and more stuff aint it.

I'm a non-technical founder of a saas app which I sold. Today I'm an investor and I'm interested in working with awesome people on exciting projects in growing markets. I live in beautiful Bend Oregon with my wonderful family and you'll find me on skis, bikes, or motorcycles whenever possible. You can connect with me on LinkedIn if you're into that.